The firm of Snarkey & Putts, Paranormal Attorneys-at-Law, breaks into novel-length stories with their second riotous adventure, Snarkey & Putts II: The Case of the Ghastly Ghostwriter (buy it here), in which the litigious pair must deal with copyright infringement from beyond the grave.

It all starts when Putts’ clients, the two younger Menninger sisters, May and June, invite him to attend a meeting of their cozy mystery writers’ group, the No-Talent Dames, in the picturesque yet pricey New England seafront village of Hoarchester-By-The-Sea. The group’s president complains to Putts that someone is stealing her members’ story ideas straight out their heads. Although Putts points out that copyright law doesn’t protect mere ideas, the Menninger sisters insist that Putts come up with some shrewd lawyer’s angle to stop the thievery.

Back at the office, Putts wants to let the whole thing drop, but Snarkey’s nostrils flare at the scent of all that old Hoarchester Yankee money. He pushes Putts to come up with a new legal theory. Putts is at his wits’ end until an undesired psychic encounter reveals that his late law school professor and mentor, an expert in intellectual property law, was working on just such a theory when he met a strange and violent end.

Academic ambition, grand larceny, kidnapping, murder and a mysterious, malevolent spirit called a spectrum concretus all come in with the Hoarchester tide driven before a gale of laughter and suspense in The Case of the Ghastly Ghostwriter, available in both Kindle eBook and paperback editions. Don’t miss it. 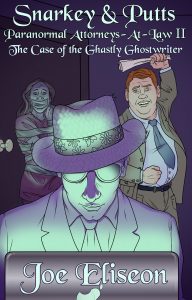 Buy The Ghastly Ghostwriter at any of the links below.