The doctor plunged into Putts’ personal space. “I am not agitated over my cousin, Mr. Putts. I am agitated because I am connected not to one, but two murders. I am facing professional disgrace and financial ruin. These things would agitate any rational person. They would agitate you, Mr. Putts.”

In The Case of the Unchained Immigrant  (buy it here), we find that the entrepreneurial Sanjay Arapura, M.D., is…, er…, agitated. People connected to his medical practice and his doughnut franchise are showing up skinned and slightly eaten. Lucky his partner in Ara-Chin Medical Testing, biologist Olivia Chin, Ph.D., is the main squeeze of Jack Snarkey, bachelor half of Snarkey & Putts, Paranormal Attorneys-At-Law.

Responding to the doctor’s frantic call for help, Snarkey and Putts learn that a potential malpractice claim is only one of the doctor’s worries. His real fear is that his malpractice insurance premiums will skyrocket, cratering his credit score and stampeding the greedy venture capitalists he’s courting to invest in Ara-Chin.

Further complications arise when Putts witnesses the doctor squabble with his cousin, Raji, who “owns” the doctor’s doughnut franchise. Putts discovers that the franchise is only the tip of the doctor’s money-making iceberg, a vast enterprise that finances Indian immigrants and turns them into doughnut-frying indentured servants.

But something sinister has followed the immigrants to America. Putts’ psychic mentors, the Menninger sisters, warn him of a dangerous presence lurking about the doctor and his cousin, a man-eating demon out of Hindu mythology, an evil spirit that Putts, despite his extrasensory abilities, can neither see nor sense.

As the body count grows and more partially eaten corpses come to light, Putts fears for the safety of his family and struggles to understand why he can’t sense the demon. But he knows that all the victims are tied to a lecture given by the first victim, a philosophy professor named Desmond, a lecture attended by Dr. Arapura and Olivia.

“Was it a date?” asks Snarkey. But Putts wants to know what the lecture was about and whether Desmond’s philosophical beliefs somehow put him on the menu. Could ideas really have consequences? Or will truth be smothered by Bavarian Cream filling?

Find out when Snarkey and Putts take on The Case of the Unchained Immigrant. 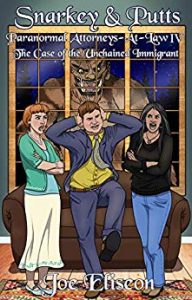 Buy The Unchained Immigrant at any of the links below.