Ah, summer:  childhood, friendship, fatherly love, baseball, bigamy, infernal machines, Werner von Braun, an encounter with ultimate evil and maybe, just maybe, a little bit of divine intervention: these are the constituent elements of The Reincarnation of Lou Gehrig, my paean to growing up in the early 1960s and the lead-in to my latest collection of short stories, KID STUFF. (Buy it here.)

For those of you too young to remember those halcyon days, it was indeed rocket science, to wit…

Then came the fortunate day when, owing to a hidden engine defect, one of my rockets caught fire in flight, descended in a wholly unanticipated trajectory and set Mrs. Trubiano’s patio umbrella ablaze. While the damage was slight and the old lady’s reaction inappropriately hysterical as far as I could judge, the fire department showed up and I was given an official public reprimand. The tale grew in the telling and my reputation was made. Because my hobbies included confirmed incendiary devices, I could not be considered a mere dork. By the age of thirteen, I had become officially weird. For a budding intellectual, this was the best of the available classifications. No one messes with a weird kid. I was left to pursue my researches in peace.

Publisher Annie Acorn has described Reincarnation as “a roller-coaster of a tale,” “an amazingly fast-paced ride,” and warns you to “[b]ring along a large handkerchief, because we guarantee you’ll laugh until you cry as you read this one!”

But Reincarnation is only the beginning of KID STUFF, which also includes:

The Mystery of Ambrose Pouter: To prove himself to a smart-aleck muffin-baking ingenue, a brainy, young boy goes blueberry-picking on a high, rocky ledge. There, on the slippery edge of fate, he has a fateful encounter with his brawny rival for the budding femme fatale’s affection. Did he fall? Was he pushed? Or was the cause something too awful to believe?

The Molasses Man: In the middle of a heat wave, a slow-as-molasses handyman tempts a sickly youngster to become as slow as he is. Will the boy give in to the heat and the temptation? Or will some timely advice turn him around?

Never Tell A Rabbit To Bring A Friend: A children’s story, in which a young boy ignores his know-it-all sister’s bossy warning, feeds a wild rabbit, and learns a hard truth about multiplication.

Down The Cape: A youngster comes of age when a sudden gale hits his grandfather’s seaside summer cottage and everything in his young life abruptly changes.

The volume is more substantial than you might think. Ambrose Pouter and Down The Cape are both novella-length, while Molasses Man weighs in as a novelette. So fill up your long afternoons this summer with Kid Stuff. 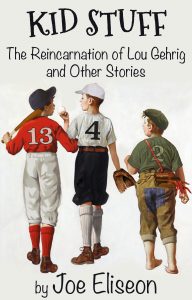 Buy KID STUFF at any one of the links below: